Due to the original demand by European chocolate confectioners who needed to produce confections faster to support their business model, a table top chocolate depositor was designed by a German company called the Pralinen-Fix. In just 13 years from its inception, over 10,000 of these table top depositors were sold in Europe alone, and this number continues to rapidly grow.

In the last few years, another version of this popular table top depositor was developed to incorporate the ability to dose both low and high heat product to accommodate candy depositing as well as chocolate depositing. This model is called the Universal Chocolate Depositor or just Universal Depositor. It has quickly gained recognition throughout the U.S. and Canada, and like the chocolate depositor, is distributed by TCF Sales.

As your production needs grow, you may wish to procure a free standing chocolate depositor and possibly even integrate with your automatic tempering machinery or chocolate tank for continuous production without interruption, or further automate you system by adding in-line vibration and cooling. However, this more automated approach can be costly so many choose to order multiple table top chocolate depositors at a fraction of the cost of a larger more automated chocolate machinery depositor. 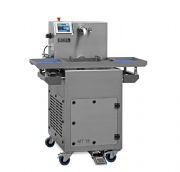